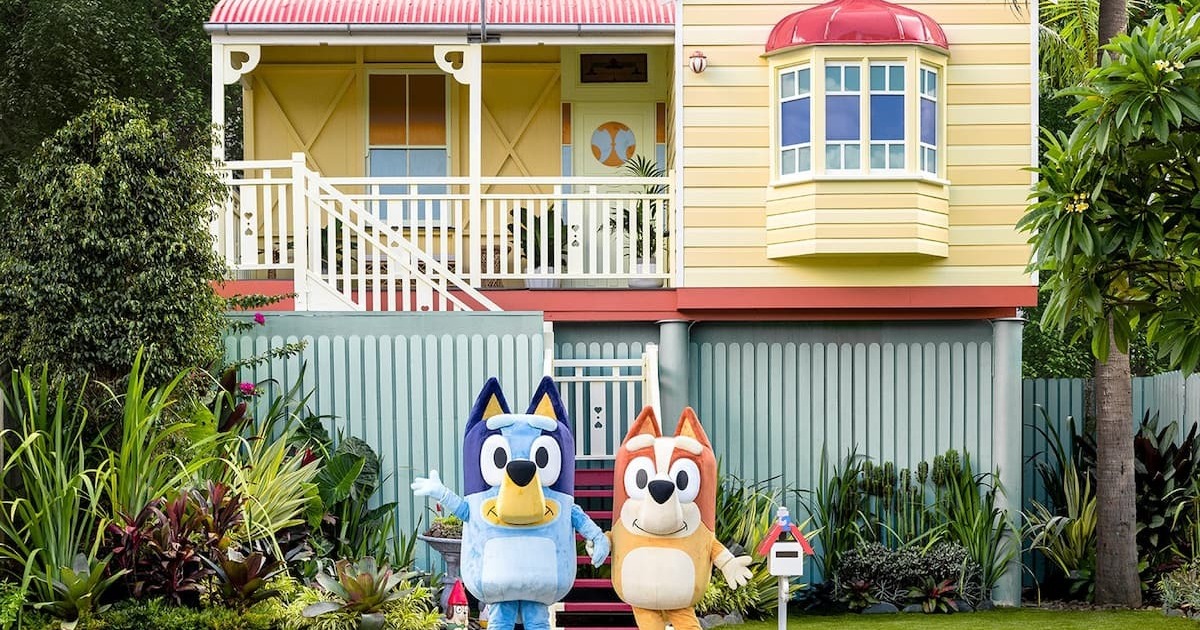 Attention, Bluey fans! You now have a chance to stay at the Heeler family’s iconic home in Paddington for just $10 a night, for a unique Bluey-themed getaway.

The colourful Queenslander has been transformed to recreate Bluey’s home, complete with familiar touches like the red letterbox, bone-adorned chimney and iconic bay window.

Other features to look forward to include Bluey and Bingo’s colourful bedroom, toy-packed playroom and lush backyard which comes with a trampoline.

Rooms are re-imagined with a breezy Mid-century modern aesthetic coupled with playful pops of colour. The girls’ playroom, with its signature rainbow canopy, kiwi rug and numerous toys – including Bluey’s beloved Chattermax toy and Magic Xylophone – is the ultimate setting for creative play.

Then parents can retreat to Bandit and Chilli’s airy and plant-filled master bedroom – complete with queen-sized bed, rattan furnishings and neutral tones.

The lucky family also gets to play games in the backyard, such as Horsey Ride and Keepy Uppy. The backyard is equipped with a BBQ, kids’-sized trampoline, Grannies’ car, custom toadstool seats and bespoke dog garden gnomes.

Those who are interested to stay in the Heeler family-inspired home in Brisbane can book their stay on a first come first served basis. Booking opens on 15 February 2022 at 5:00 a.m.

Aside from having the home to yourselves, you also get to enjoy some of the amenities offered, including Wi-Fi, air conditioning, a private backyard, and free parking on premises.

This one-of-a-kind experience is a partnership between AirBnB and BBC Studios, co-commissioner and global distributor of Bluey.

“The Heeler house is almost a character in its own right. We’ve been amazed at the outpouring of love the fans have shown for this iconic setting, and for all the beautiful Queensland locations the crew have so lovingly included across the three series. Bringing Bluey’s backdrop to life in such an ingenious and colourful way for our fans has been an absolute delight,” said Madeleine Jelfs, Bluey Senior Marketing Manager, BBC Studios Australia and New Zealand.

Please note that only a maximum of two adults and two children can spend some time at the house for a weekend stay. For more details, check out their AirBnB listing.