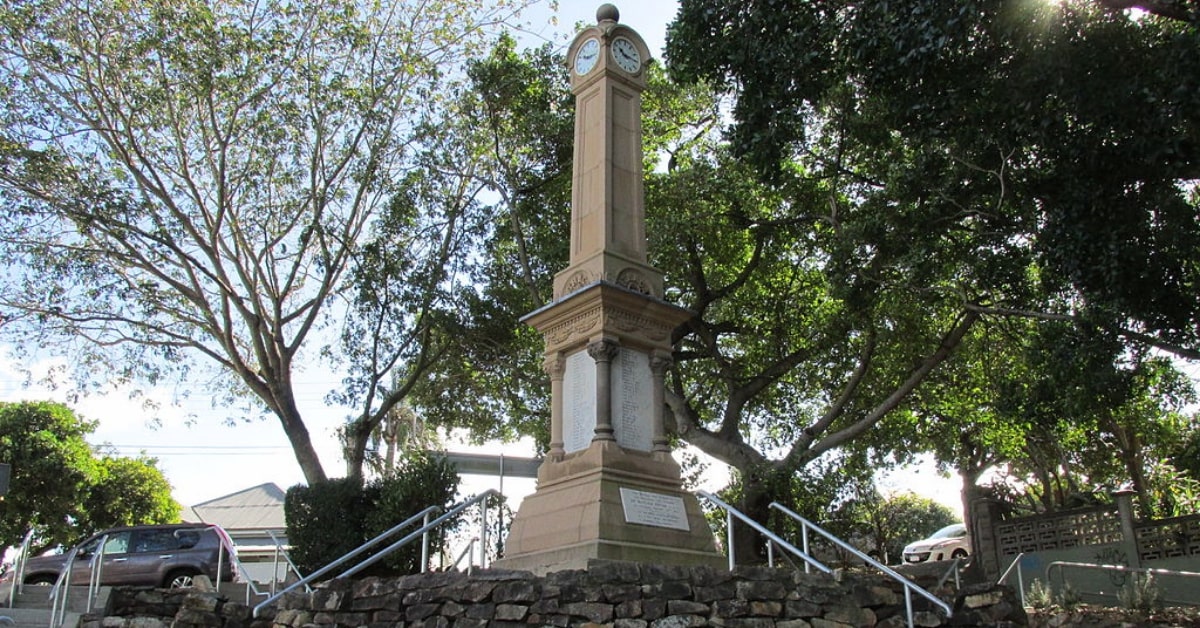 Did you know that the heritage-listed Ithaca Memorial Park used to be called Alexander Jolly Park, Ithaca’s landscape gardener who laid out the park grounds?

Ithaca Memorial Park features Brisbane’s lone war memorial clock with a face on all four sides, perched on a concrete platform. Dry stone retaining walls surround the clock tower with four steps leading to each side, thereby forming a cross around it.

Although many types of war memorials exist in Queensland, not too many clock towers were built. The Ithaca Memorial clock tower is the earliest of its kind built in the state, and only clock memorial in Brisbane.

The war memorial was erected between 1921 and 1925 at a cost of £650 through the funds raised by a committee representing the Ithaca citizens. A. H. Thurlow was commissioned to design and create the clock tower under the supervision of Ithaca Engineer, R Black.

The clock was manufactured by Synchronome Electric Company. A master clock located at the adjacent Ithaca Fire Station was originally used to drive the clock mechanism.

The front inscription of the memorial reads:

Erected by the townspeople of Ithaca

In honour of their soldiers who fell in the Great War”

The back inscription, on the other hand, reads:

“This memorial was unveiled by His Excellency the Governor Sir Matthew Nathan P.C., G.C.M.G., on Saturday, February 25th 1922

All four side inscriptions include the names of the soldiers who died in the Great War.

The memorial was unveiled on 25 February 1922 by Governor Sir Matthew Nathan.

The park where the memorial monument resides lies between Enoggera and Latrobe Terraces, Paddington. Alexander Jolly, Ithaca Town Council’s landscape gardener, was the man responsible for the landscaping of the park.

Alexander, the son of a Scottish farmer, came to Brisbane at age 22. An avid horticulturist, he was the head gardener on Alexander Stewart’s Glen Lyon estate in Ashgrove, prior to working for Ithaca Town Council.

His other landscaping works include the rockeries along Musgrave and Waterworks Roads and the landscaping of Cook’s Hill, which was removed when the Paddington Tramways Substation was erected in 1929–30.

In memory of his death, the park was renamed the Alexander Jolly Park. Today, it is known as Ithaca Memorial Park, under the care of Brisbane City Council since 1925.