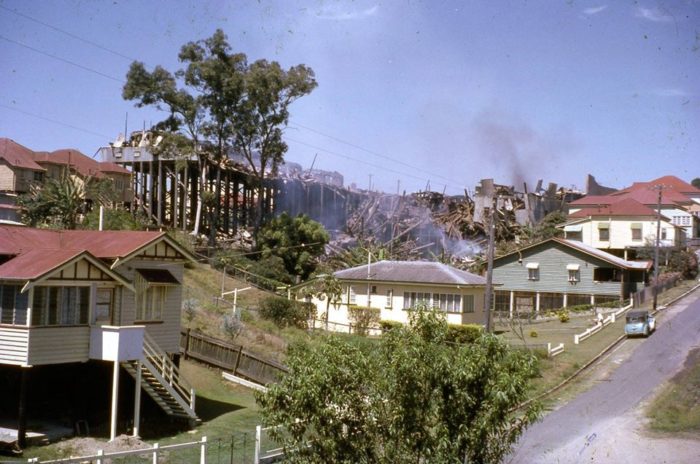 In 2018, Paddington commemorates the 56th anniversary of the Paddington Tram Depot fire, a crucial point in history that marked the beginning of the end for the Brisbane Tramway system.

The Paddington Tram Depot under construction

The Paddington Tram depot was built in 1915 servicing western suburbs and a total of 13 roads. The depot was constructed on the side of the hill on Latrobe Terrace in Paddington using timber and corrugated iron panels.

On 28 September 1962, the Paddington tram depot was engulfed by a terrible fire. It was to be one of the largest fires in Brisbane’s history. That fateful night, the destructive fire devoured sixty-five trams; that’s a fifth of the Brisbane Tramways Company’s tram fleet.

The fire was believed to have started in a storage area. About 30 firefighters attempted to control the fire but was hindered by low water pressure. Deposits of oil and grease from years of operation continued fueling the blaze that was visible from its nearby suburbs. Despite the firefighters’ heroic efforts, the depot was completely destroyed by the fire that lasted for almost a week.

That fire did not only bring destruction but it also marked the beginning of the end for the tram system in Brisbane. Conspiracy theories about what really started the fire surfaced since it happened at a time when plans about replacing the trams and trolleybuses with diesel units were already brewing.

Despite a huge investigation, the cause of the fire was not determined. In December 1962, four tram routes were closed. Kalinga Toowong, Bulimba Ferry, and Rainworth were converted into bus operation routes. The City Council hired buses from the New South Wales government to mitigate the situation.

In June 1968, the Brisbane City Council made an announcement about the impending closure of the tramways. Ultimately, the tram system closed in April 1969 with the bus operations replacing all of the former tram routes.

The site where the depot once stood was sold by the City Council. Today, it is home to the Paddington Central Shopping Centre.