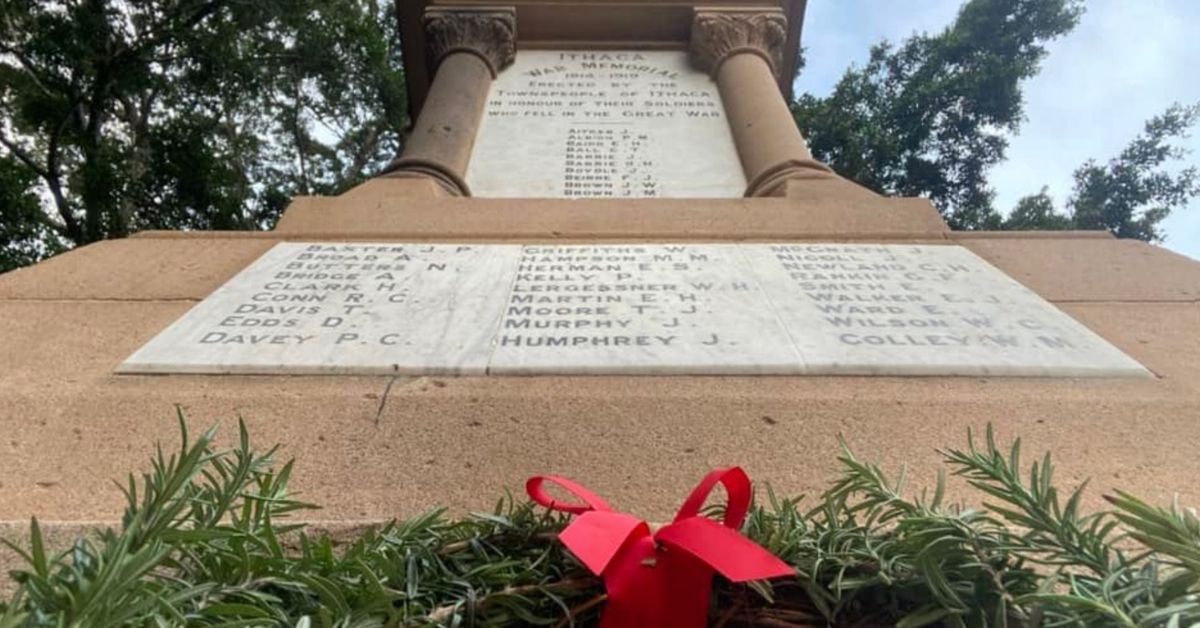 Photo Credit: Paddington Then and Now/Facebook

Did you know that the Ithaca War Memorial, located at the Alexander Jolly Park in Paddington, is celebrating its centenary in 2022?

In February 1922, Sir Matthew Nathan, the former Governor of Queensland, commissioned the masonry firm of Arthur Henry Thurlow to build the First World War Memorial for the heroes of World War I after years of discussions with the Ithaca Town Council.

The Honour Board at Council

In 1915, the Council planned on creating an honour board for those who volunteered in the war. The honour board was placed at the Ithaca Town Council Chambers on 99 Enoggera Terrace and had an initial 400 names, as sent in by relatives or friends.

Two years later, when the honour board had close to 700 names, the people wanted a more public place of honour for the war heroes. However, plans to build the war memorial were stalled after the Queensland Government’s War Committee would not release any funding for war memorials, citing fulfillment of present war needs.

“Another matter which came before the council was that of issuing permits to collect for war memorials. The council, in consonance with the decisions of the southern bodies, declared that collections of this nature should be postponed until the present war needs have been met.”

By 1918, however, another push for a war memorial was laid bare following the Armistice. The residents tried to raise funds through donations, concerts, and fetes for three years until there was sufficient money to start considering the memorial’s design.

While a memorial hall was considered, Council decided against it due to the maintenance cost. By mid-2021, Cook’s Hill was chosen for the memorial’s site with the names of the fallen engraved in the memorial.

Unveiling of the Ithaca War Memorial

By the time the stone memorial was ready to be unveiled, it had 130 names of men who died while serving in the war. The Council settled on a clock tower design because this type of memorial was rare in Queensland. In fact, the Ithaca War Memorial was one of the earliest types of clock towers in the region and the lone clock tower in Brisbane.

Per the Queensland Register, “The First World War Memorial comprises a pedestal and column surmounted by a clock with a face on all four sides. It sits on a square concrete platform and is surrounded by dry stone retaining walls and a concrete path. Steps lead to the memorial from each of the four sides forming a cross in plan, with the overall geometry softened by planting, retaining walls and the steep slope of the site.

Read: Given Terrace Estate in Paddington is 100 Years Old!

The sandstone memorial sits on a smooth-faced base step which is surmounted by a larger step of sandstone blocks with tapered sides. On the front face of this is a marble plaque. The pedestal comprises a recessed square pillar with engaged columns at each corner. Each face bears a recessed marble plate with the leaded names of the 130 men who died. The columns have Composite order capitals and bases and support a large entablature. The frieze has relief carved festoons on each face and has a small dentil course under the cornice which is composed of cyma recta and cyma reversa mouldings.”

The park on Cook’s Hill almost did not survive the progress and development in Paddington. When the Paddington Tramways Substation was up for construction, most of the garden in Cook’s Hill was almost gone.

Thus, when the Ithaca War Memorial was unveiled, it did not have enough greens and it did not look like a landmark. The Ithaca Town Council then hired Alexander Jolly to develop the landscape garden.

Mr Jolly was the father of William Jolly, the first Lord Mayor of Brisbane. After his death in 1925, Cook’s Hill park was renamed Alexander Jolly Park.

The Ithaca War Memorial and the Alexander Jolly Park were entered into the Queensland Heritage Register in October 1992.